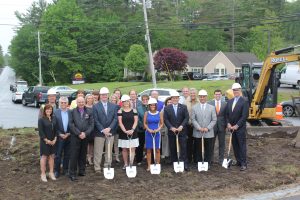 Friends, neighbors, town officials and associates of the Letizio family were on hand for a ground-breaking ceremony which was held on Monday June 5th, 2017 to mark the beginning of the Letizio family’s construction project on Enterprise Drive in Windham. The project consists of a major facility and site expansion at the current A.J. Letizio Sales & Marketing headquarters at Fifty-Five Enterprise Drive and the construction of the new 20,000 sq. ft. A.J. Letizio Enterprise Center. It also marks the beginning of a major beautification effort by the Letizio family for the benefit of the Town of Windham which features the construction of a commemorative historic tower, to be located in the center of the cul-de-sac of Enterprise Drive, adjacent to the I93/Rt.111 interchange. The structure is a replica of a similar nearby lookout tower built by Edward Searles at the turn of the 20th century, one hundred years ago and its characteristics are meant to embody the architecture featured prominently in Windham’s town emblem. The addition of this 43 ft. tall stone feature is meant to transform the current empty location at the foot of Enterprise Drive, at into an attractive site that symbolizes the history and traditions of Windham, a town whose motto is “Old Values – New Horizons.” The tower’s anticipated completion in August of 2017 comes just in time for the town’s 275th celebration, when the Letizio family plans a dedication of the tower to the town of Windham as a permanent monument.

Read more at the Eagle Tribune