One Family’s Affinity For The Food Business Spans Four Generations.

Republished by permission from Windham Magazine. 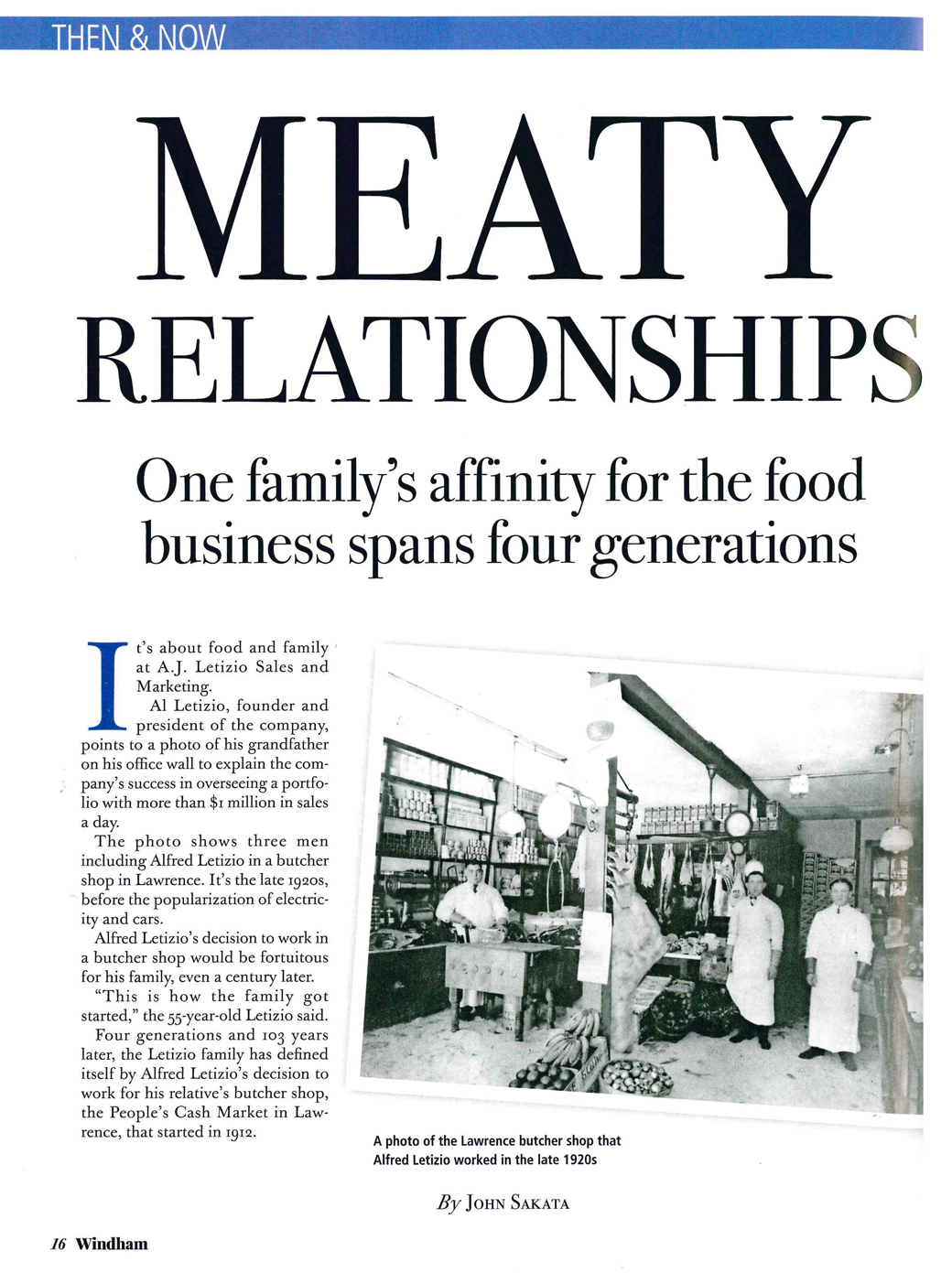 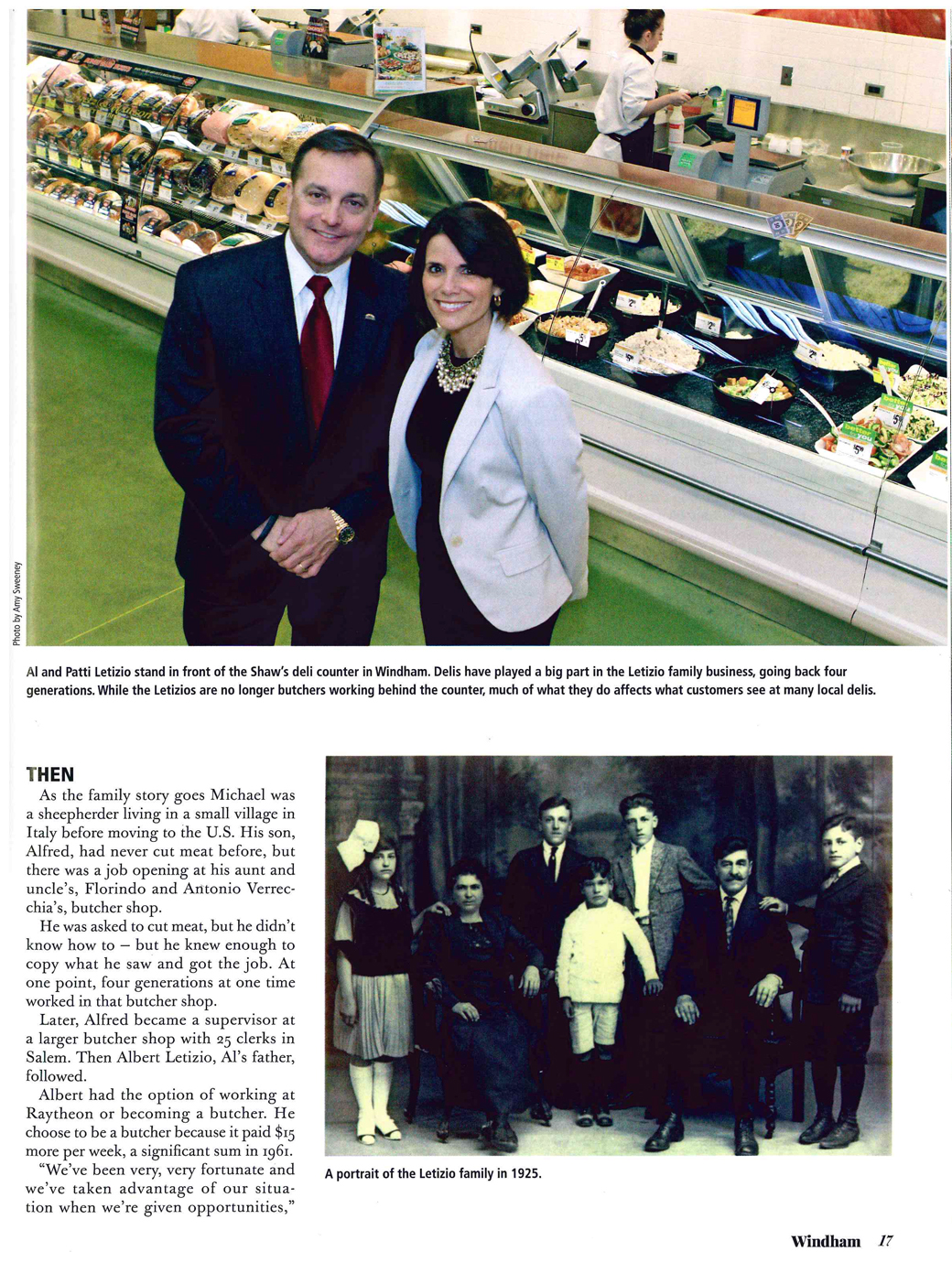 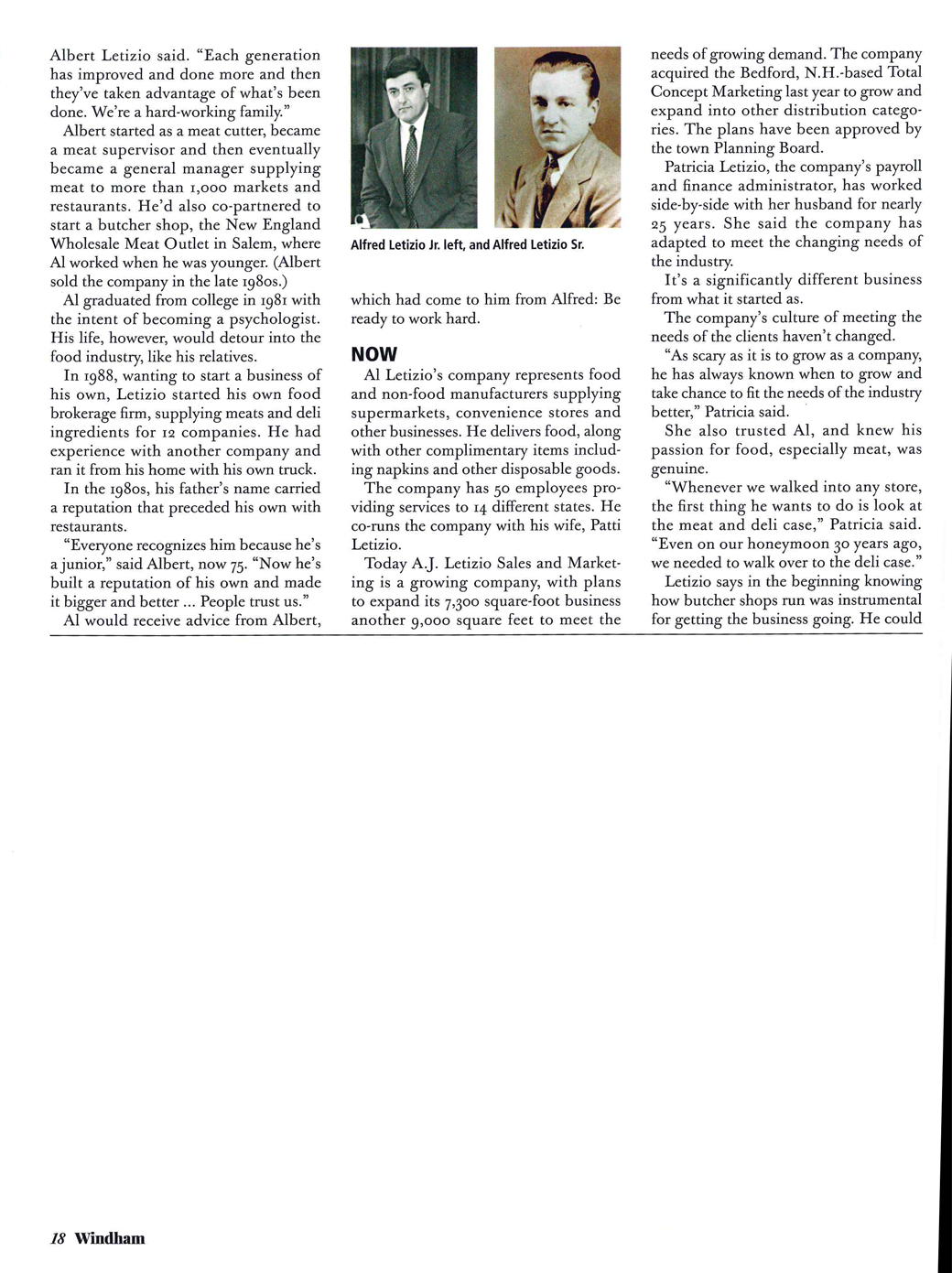 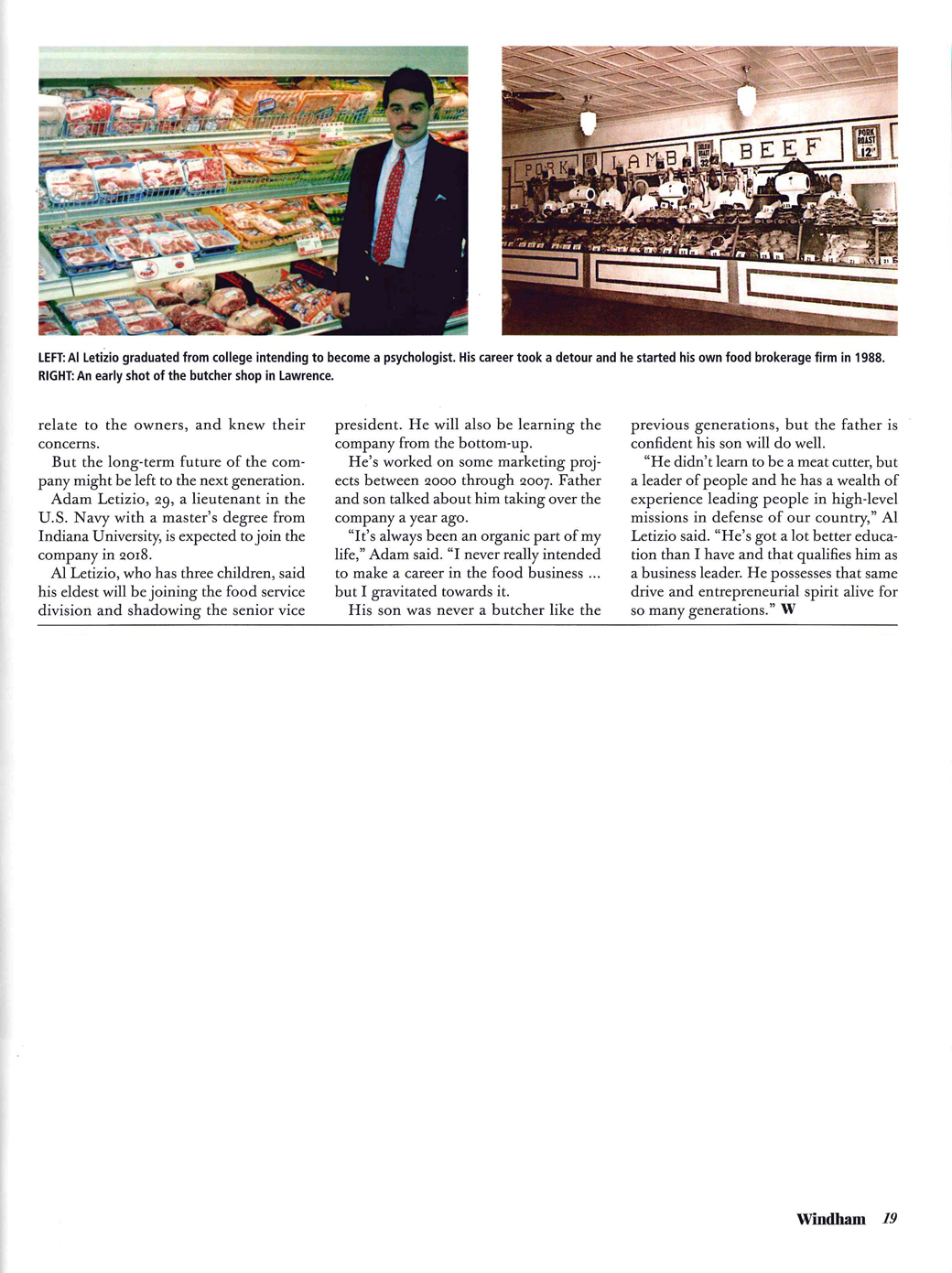 It’s about food and family at A.J. Letizio Sales & Marketing.

Al Letizio, founder and president of the company, points to a photo of his grandfather on his office wall to explain the company’s success in overseeing a portfolio with more than $1 million in sales a day.

The photo shows three men including Alfred Letizio in a butcher shop in Lawrence. It’s the late 1920s, before the popularization of electricity and cars.

Alfred Letizio’s decision to work in a butcher shop would be fortuitous for his family, even a century later.

“This is how the family got started,” the 55-year old Letizio said.

Four generations and 103 years later, the Letizio family has defined itself by Alfred Letizio’s decision to work for his relative’s butcher shop, the People’s Cash Market in Lawrence, that started in 1912.

As the family story grows Michael was a sheepherder living in a small village in Italy before moving to the U.S. His son, Alfred, had never cut meat before, but there was a job opening at his aunt and uncle’s, Florindo and Antonio Verrecchias’s butcher shop.

He was asked to cut meat, but he didn’t know how to – but he knew enough to copy what he saw and got the job. At one point, four generations at a one time working in that butcher shop.

Later, Alfred became a supervisor at a larger butcher shop with 25 clerks in Salem. Then Albert Letizio, Al’s father, followed.”

Albert had the option of working at Raytheon or becoming a butcher. he chose to be a butcher because it paid $15 more per week, a significant sum in 1961.

“We’ve been very, very fortunate and we’ve taken advantage of our situation when we’re given opportunities”

Albert Letizio said. Each generation has improved and done more and then they’ve taken advantage of what’s been done. We’re a hard-working family”

Albert started as a meat cutter, became a meat supervisor and then eventually became a general manager supplying meat to more than 1,000 markets and restaurants. He’d also co-partnered to starta a butcher shop, the New England Wholesale Meat Outlet in Salem, where Al worked when he was younger. (Albert sold the company in the late 1980s).

Al graduated from college in 1981 with the intent on becoming a psychologist. His life, however, would detour into the food industry, like his relatives.

In 1988, wanting to start a business of his own, Letizio started his own food brokerage firm, supplying meats and deli ingredients for 12 companies. He had experience with another company and ran it from his home with his own truck.

In the 1980s, his father’s name carried a reputation that preceded his own with restaurants.

“Everyone recognizes him because he’s a junior” said Albert, now 75. “Now he’s built a reputation of his own and made it bigger and better…People trust us.”

Al would receive advice from Albert, which had come to him from Alfred: Be ready to work hard.

Al Letizio’s company represents food and non-food manufacturers supplying supermarkets, convenience stores and other businesses. He delivers food, along with other complimentary items including napkins and other disposable goods.

The company has 50 employees providing services to 14 different states. He c-runs the company with his wife, Patti Letizio.

Today A.J. Letizio Sales & Marketing is a growing company, with plans to expand its 7,300 square-foot business another 9,000 square feet to meet the needs of growing demand. The company acquired the Bedford, N.H.-based Total Concept Marketing last year to grow and expand into other distribution categories. The plans have been approved be the town planning board.

Patricia Letizio, the company’s payroll and finance administrator, has worked side -by- side with her husband for nearly 25 years. She said the company has adapted to meet the changing needs of the industry.

It’s a significantly different business from what it started as.

The company’s culture of meeting the needs of the clients haven’t changed.
“As scary as it is to grow a s a company, he has always known when to grow and take a chance to the needs of the industry better,” Patricia said.

She also trusted Al, and knew his passion for food, especially meat, was genuine.

“Whenever we walked into any store, the first thing he wants to do is look at the meat and deli case,” Patricia said. “Even on our honeymoon 30 years ago, we needed to walk over to the deli case.”

Letizio says in the beginning knowing how butcher shops run was instrumental for getting the business going. He could relate to the owners, and knew their concerns.”

But the long-term future of the company might be left to the next generation.

Adam Letizio, 29, a lieutenant in the U.S. Navy with a master’s degree from Indiana University, is expected to join the company in 2018.

Al Letizio, who has three children, said his eldest will be joining the food service division and shadowing the senior vice president. He will also be learning the company from bottom-up

He’s worked on some marketing projects between 2000 through 2007. Father and son talked about him taking over the company a year ago.

“It’s always been an organic part of my life” Adam said. “I never really intended to make a career in the food business…but I gravitated towards it.

His son was never a butcher like the previous generations, but the father is confident his son will do well.

“He didn’t learn to be a meat cutter, but a leader of people and he has a wealth of experience leading people in high-level missions in defense of our country,” Al Letizio said. “He’s got a lot better education than I have and that qualifies him as a business leader. He poseses that same drive and entrepreneurial spirit alive for so many generations.”