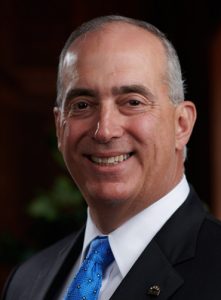 Al and Bob have been close friends for decades, since they first met in the 1980’s when Bob was an emerging leader in the fresh foods world. Bob’s career in the industry started at store level with Waldbaum’s on Long Island New York, where he sharpened his skills as a creative merchant, gaining expertise in Meat, Deli, Seafood, and In-Store Bakery.  His career advanced from store level merchandising to the wholesale, distribution, and management end of the business with the nation’s leading wholesaler at the time, Supervalu Foods, where Bob was fast tracked to senior management training. During his career development, Bob and his family moved from his native Long Island birthplace to locations from Maine to Florida as Bob’s career continued to advance.

Bob was a key supporter of A.J. Letizio from even before its inception in 1988. Bob and Al also served together on the Board of Directors of the New England Diary Deli Association, and together were a driving force in that organization’s evolution into the Northeast Fresh Foods Alliance. In 2004, Al called on his friend Bob to join A.J. Letizio and to serve in the role of Senior Vice President of the company’s Retail Division. Bob agreed to join, and both planned for a 10-year path toward retirement. “I knew that Bob had no experience as a Food Broker and that I was taking a chance in asking him to take over and lead our company’s core business segment at that time, but I had confidence in Bob’s talents and judgement and trusted him, and I bet everything on him,” said Al Letizio Jr.

That bet was a good one for Al and Bob. Under Bob’s leadership of the A.J. Letizio Retail Division, the company completed a geographic expansion that tripled its service area from its origins in the six states of New England to seventeen of the eastern United States, while nearly quadrupling sales under his leadership by 2017. In 2018, with continued growth and expansion forecasted at A.J. Letizio, and with the company embarking on the construction of its new $7.2 million national headquarters location and multiple corporate acquisitions planned, Al tapped Bob again to take over as President and COO of A.J. Letizio, where Bob’s responsibilities would be expanded to encompass all operations including Retail and Foodservice, a move allowing Al to transition to the role of CEO. During Bob’s tenure from 2018 to 2021, A.J. Letizio’s overall sales grew an additional 60% and Bob continued to recruit and develop the future leadership teams at A.J. Letizio.

Eighteen years into that original ten-year plan, Bob’s influence on the success of A.J. Letizio has been significant in poising the company for continued success into the future. Al Letizio, Jr added “No one has contributed more to the success of our company that Bob Tessitore.” Today’s dynamic team at A.J. Letizio, which includes the next generation of the Tessitore and Letizio family as part of the lineup of professionals in our Eastern United States footprint, is executing our new 20-year strategic plan and carrying that legacy forward.

The A.J. Letizio team plans to honor Bob at its upcoming annual awards event in Boston’s Seaport later this month.