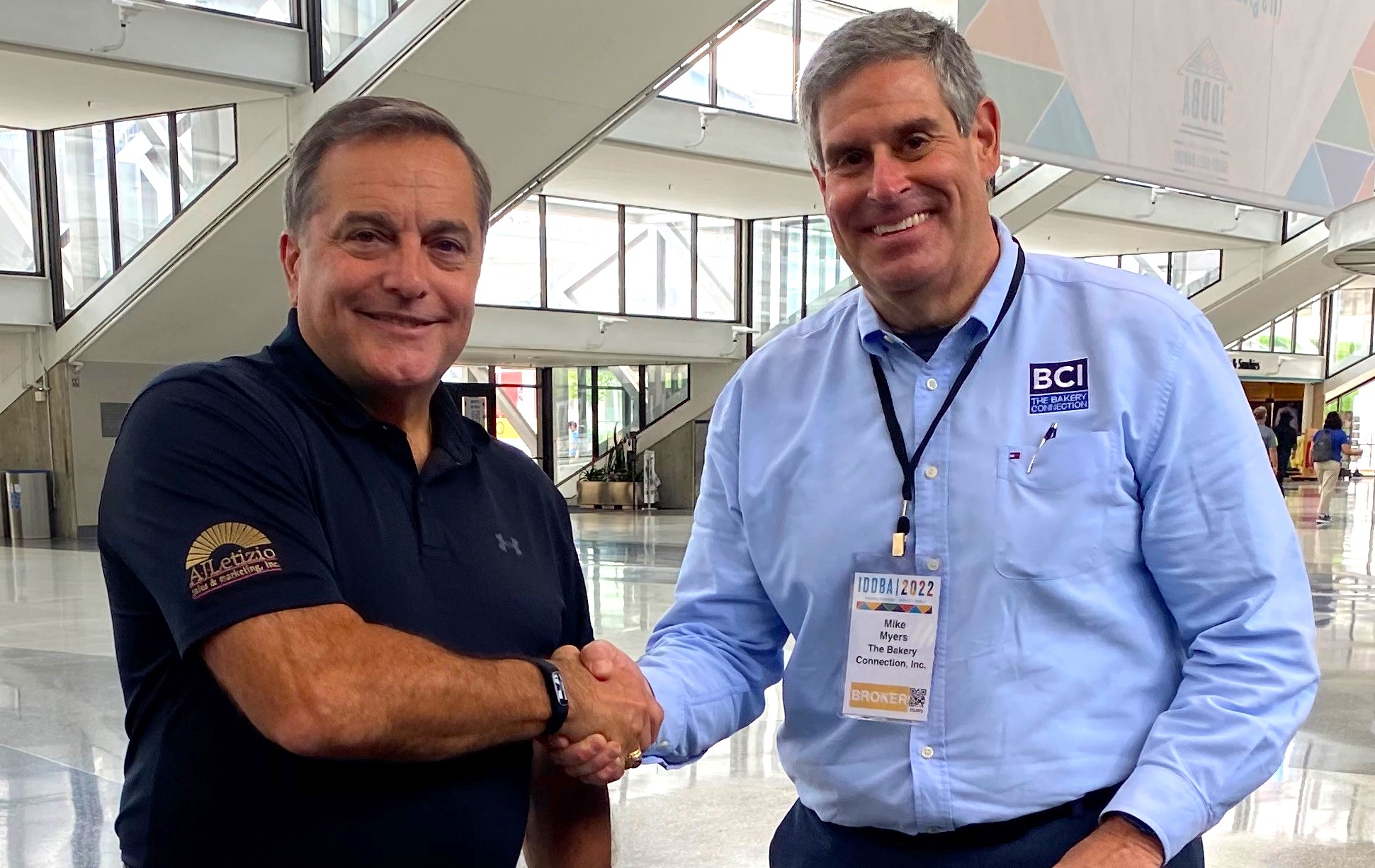 A.J. Letizio Sales & Marketing, Inc. of Windham, NH announced June 1st, 2022 that the company has reached an agreement with The Bakery Connection, Inc. of Glastonbury, Connecticut (BCI), to acquire their business. The BCI organization is known throughout the industry as one of East Coast’s most respected bakery sales and marketing agencies. Founder and owner Mike Myers agreed to the deal that transfers ownership of BCI to A.J. Letizio effective July 1, 2022 and merges the two organization into the largest and most comprehensive In-Store Bakery Sales agency in the Eastern United States. In the agreement, all 25 staff members of BCI join A.J. Letizio, and will continue forward as part of the newly combined team. A.J. Letizio has named Mike Myers as Vice President of Bakery for the Northeast United States, while A.J. Letizio’s John DeRoy will serve as Vice President for the Southeast United States. A.J. Letizio will be taking over the BCI headquarters in Glastonbury and has plans to develop the facility into its regional headquarters and training center, serving both its Retail and Foodservice Business. The Bakery Connection Inc. was founded in 1993 by Michael Myers who built BCI on integrity and hard work. His only goal was to become the most trusted bakery brokerage company on the entire East Coast. With its focus on providing the highest quality bakery products, BCI has earned its reputation as the most trusted liaison between the manufacturers of the products and the stores in which they are sold. A.J. Letizio and BCI share a common culture of old-fashioned values that have been carried on for generations. The Letizio family traces its five-generation origins in the food business to the family’s Italian market in Lawrence, MA in 1912. Mike Myers’ roots in the business go back to his grandfather’s kosher meat market “Myers Quality Meats” in New Haven Connecticut, also in the early years of the 20th century. “The merger of the A.J. Letizio and BCI Team creates a combined team that will have unmatched capabilities to provide a positive impact on the Eastern United States In-Store bakery business. This merger is a strategic step for both companies,” said Al Letizio, Jr., Chief Executive Officer of A.J. Letizio. “We are enthusiastic about the successful combination of our corporate cultures, the proven track record of our leadership team and the complementary nature of the A.J. Letizio and BCI brands.” “It’s such a natural fit bringing our organizations together,” said Mike Myers, Owner, Founder & President of BCI. “Our team members know each other and share the same values and work ethics. Our combined resources will deliver an unparalleled level of service to our customers and clients.” A.J. Letizio Sales & Marketing is a privately owned independent Super Regional Sales Agency in the Eastern United States that celebrates its 34th year in operation in 2022. The company provides service to the Retail and Consumer Packaged Goods industry throughout the Eastern United States and to the Foodservice & Disposable Goods Division industry in the Northeast United States. A.J. Letizio supports its business with over 125 of the industry’s finest professionals on staff, headquartered in Windham New Hampshire, and with regional headquarter facilities in New York City; Rochester, New York; Parlin, New Jersey; a planned new facility in Philadelphia; and now from its new Glastonbury Connecticut facility. 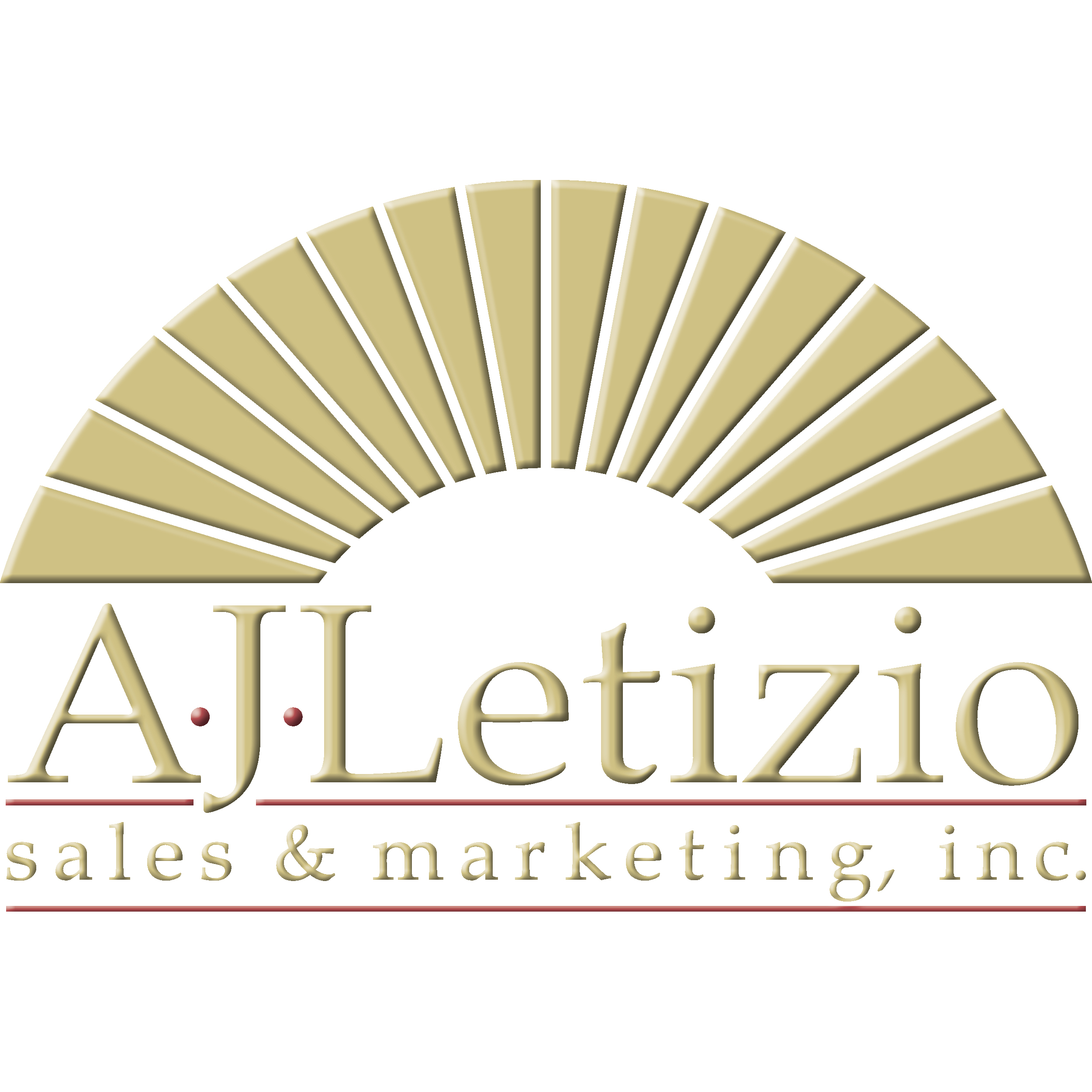 A.J. Letizio Sales & Marketing, Inc. is pleased to announce that Rebecca Fila will join its Foodservice & Disposable Goods Division. Rebecca will serve as an Account Manager and K-12 Specialist in the New England Market. Rebecca has over twenty years of experience in foodservice and K-12 sales. Rebecca joins A.J. Letizio with a distinguished background in foodservice. She has held positions as a broker, direct representative, and in foodservice operations. Rebecca has worked with companies including Lamb Weston, Pacific Coral Seafood, and Map Foodservice. Rebecca lives in Southwick, MA with her family. “Rebecca is an incredibly well-rounded sales professional,” says SVP Adam Letizio. “We are extremely excited to have her on board.” A.J. Letizio Sales & Marketing is a Super-Regional Sales Agency that celebrates its 34th year in operation in 2022. As Windham, New Hampshire’s largest private employer, A.J. Letizio and its staff members operate out of an award-winning national headquarters in Windham, as well as satellite offices in Rochester, New York City, and Parlin, NJ. A.J. Letizio’s Retail and Consumer Packaged Goods Division provides service throughout the Eastern United States and its Foodservice & Disposable Goods Division operates in the Northeastern United States. For more information, visit www.ajletizio.com 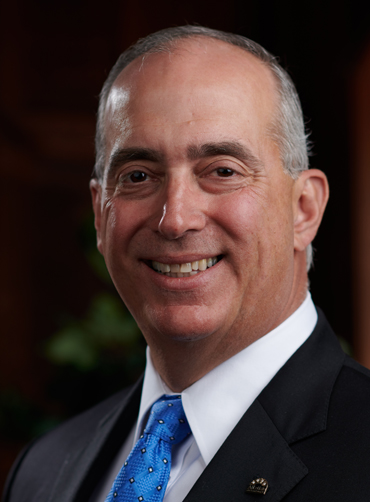 Al Letizio, Jr., President and Chief Executive Officer and Bob Tessitore, President and Chief Operating Officer at A.J. Letizio Sales & Marketing announced that Tessitore will be retiring from his position as COO at A.J. Letizio at the end of February 2022. Al Letizio Jr. will be assuming Bob Tessitore’s responsibilities and Bob will remain on call as a personal advisor to Al, following Bob’s 18 years of service as part of the A.J. Letizio Senior Executive Team. Al and Bob have been close friends for decades, since they first met in the 1980’s when Bob was an emerging leader in the fresh foods world. Bob’s career in the industry started at store level with Waldbaum’s on Long Island New York, where he sharpened his skills as a creative merchant, gaining expertise in Meat, Deli, Seafood, and In-Store Bakery.  His career advanced from store level merchandising to the wholesale, distribution, and management end of the business with the nation’s leading wholesaler at the time, Supervalu Foods, where Bob was fast tracked to senior management training. During his career development, Bob and his family moved from his native Long Island birthplace to locations from Maine to Florida as Bob’s career continued to advance. Bob was a key supporter of A.J. Letizio from even before its inception in 1988. Bob and Al also served together on the Board of Directors of the New England Diary Deli Association, and together were a driving force in that organization’s evolution into the Northeast Fresh Foods Alliance. In 2004, Al called on his friend Bob to join A.J. Letizio and to serve in the role of Senior Vice President of the company’s Retail Division. Bob agreed to join, and both planned for a 10-year path toward retirement. “I knew that Bob had no experience as a Food Broker and that I was taking a chance in asking him to take over and lead our company’s core business segment at that time, but I had confidence in Bob’s talents and judgement and trusted him, and I bet everything on him,” said Al Letizio Jr.   That bet was a good one for Al and Bob. Under Bob’s leadership of the A.J. Letizio Retail Division, the company completed a geographic expansion that tripled its service area from its origins in the six states of New England to seventeen of the eastern United States, while nearly quadrupling sales under his leadership by 2017. In 2018, with continued growth and expansion forecasted at A.J. Letizio, and with the company embarking on the construction of its new $7.2 million national headquarters location and multiple corporate acquisitions planned, Al tapped Bob again to take over as President and COO of A.J. Letizio, where Bob’s responsibilities would be expanded to encompass all operations including Retail and Foodservice, a move allowing Al to transition to the role of CEO. During Bob’s tenure from 2018 to 2021, A.J. Letizio’s overall sales grew an additional 60% and Bob continued to recruit and develop the future leadership teams at A.J. Letizio. Eighteen years into that original ten-year plan, Bob’s influence on the success of A.J. Letizio has been significant in poising the company for continued success into the future. Al Letizio, Jr added “No one has contributed more to the success of our company that Bob Tessitore.” Today’s dynamic team at A.J. Letizio, which includes the next generation of the Tessitore and Letizio family as part of the lineup of professionals in our Eastern United States footprint, is executing our new 20-year strategic plan and carrying that legacy forward. The A.J. Letizio team plans to honor Bob at its upcoming annual awards event in Boston’s Seaport later this month. 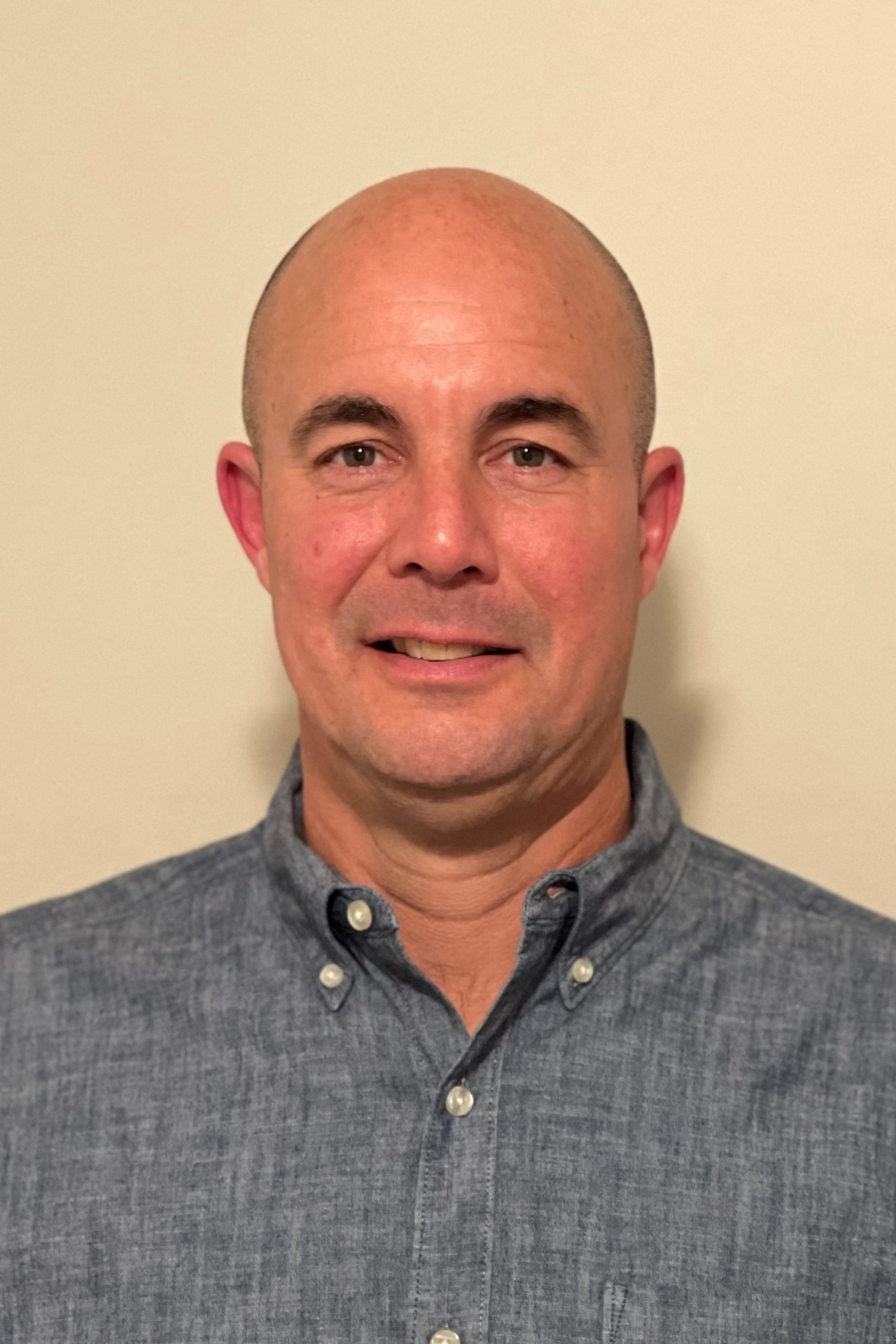 A.J. Letizio Sales & Marketing, Inc. is pleased to announce that Edward Gould will join its Foodservice & Disposable Goods Division, starting on Monday, December 20th. Eddie will serve as a Business Manager in the Upstate New York Market and will be covering sales primarily in the Buffalo area. This addition to the A.J. Letizio strengthens an already dominant team serving the Upstate New York market. Eddie comes to A.J. Letizio with an impressive background in foodservice. He has held positions as a broker, direct representative, sales, executive sous chef, and other culinary positions. Most recently, Eddie was on the sales team at CORE Foodservice. Eddie lives in Williamsville, NY, with his wife Rachel and their children Taylor and Eddie. “With over thirty years of industry experience, Eddie is going to be an incredible asset to our organization.” says SVP Adam Letizio. “Undoubtedly he will make us all better at what we do.” A.J. Letizio Sales & Marketing is a Super-Regional Sales Agency that will celebrate its 34th year in operation in 2022. As Windham, New Hampshire’s largest private employer, A.J. Letizio and its staff members operate out of an award-winning national headquarters in Windham, as well as satellite offices in Rochester, New York City, and Parlin, NJ. A.J. Letizio’s Retail and Consumer Packaged Goods Division provides service throughout the Eastern United States and its Foodservice & Disposable Goods Division operates in the Northeastern United States. For more information, visit www.ajletizio.com