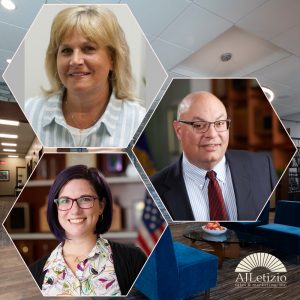 Lynne Pellegrini has served as Director of Sales for K-12 and Healthcare for the past six years with A.J. Letizio and has overseen a period of great growth. Under her leadership the company more than doubled the team of K-12 specialists and the client portfolio grew to include top-tier manufacturers throughout the entire Northeast. Lynne’s day-to-day account responsibilities remain focused on K-12 customers in southern New England, but her leadership efforts at A.J. Letizio will be aimed at delivering consistent, efficient, and effective results in the Healthcare category, a segment that is nationally projected to outpace the growth of all other foodservice segments.

Cassie Miller-Leone has served as a K-12 specialist with A.J. Letizio for the past three years and has consistently grown the business in the New York territory. Cassie has earned every accolade along the way, including the New York School Nutrition Association’s 2021 Jeff Siegel Award for professionalism in business, personal integrity, and outstanding dedication. Universally respected by peers and clients alike, Cassie is ideally suited to step into the K-12 Category Director role.

A.J. Letizio Sales & Marketing is a privately owned independent Super Regional Sales Agency in the Eastern United States that celebrates its 34th year in operation in 2022. The company provides service to the Retail and Consumer Packaged Goods industry throughout the Eastern United States and to the Foodservice & Disposable Goods Division industry in the Northeast United States. A.J. Letizio supports its business with over 125 of the industry’s finest professionals on staff, headquartered in Windham New Hampshire, and with regional headquarter facilities in New York City; Rochester, New York; Parlin, New Jersey; a planned new facility in Philadelphia; and now from its new Glastonbury Connecticut facility.